Lakshmi – Indian name logo – day 7 of the logo challenge and I tried to create a logo based on one of the most popular Indian Names. Lakshmi. 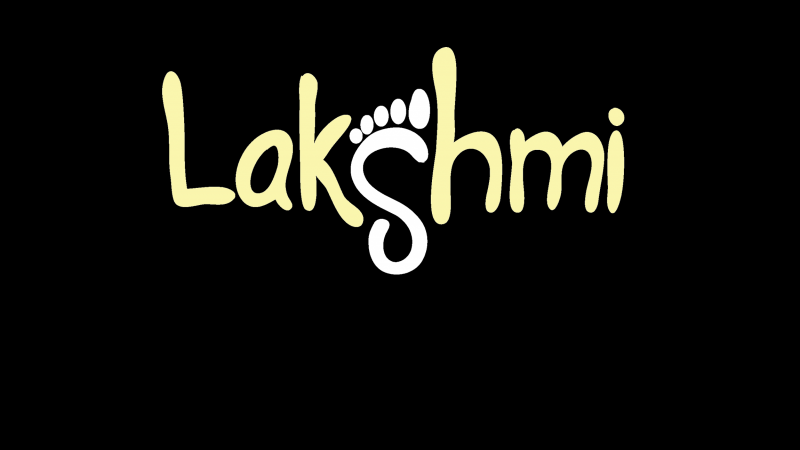 This is a part of the 30-day Indian logo Challenge where I try to create a new minimalistic Indian Name Logo every day for 30 days.

This post is about the thought behind the logo and how I created it.

You can also visit my youtube channel for a time-lapse video of the designing process.

Meaning of the term LAKSHMI

Lakshmi is perhaps the most popular name in the Southern part of India. Laksmi refers to the goddess of wealth and is revered by all the Hindu people around the world.

As far as the name is considered there are quite a few variations of the word – Laxmi, Luxmi, Lacchmi. However, I choose to use Lakshmi variation.

The concept behind Lakshmi Logo

Before I go into the concept I should tell you a story.

I am from a Bengali family in Assam and in our house (unlike the Hindi speaking population) we do not celebrate Lakshmi Puja during the Diwali. We celebrate Kali pooja during Diwali. In Assam, Odisha, Tripura, and West Bengal, Lakshmi Puja falls on the full moon day of the lunar month of Ashwin.

So during Lakshmi Puja, my mother used to draw Alpona (more about this in the latter part of the post). The most beautiful thing I loved about this was the cute little footprints drawn. These were to signify the footprints of Goddess Lakshmi and mean that she is arriving at home. In other parts of India, there is a tradition of drawing the Lakshmi Goddess footprints (Shripada) on the thresholds of the house pointing inwards.

This Shripada or footprint was the main concept behind the logo. This when drawn in the authentic style looks like the English letter S.

As I have mentioned that the concept of the logo is based on Alpona. Alpona is a Bengali artform where designs are made on the floor using a paste of rice and water. Although mainly practiced during Lakshmi pooja, it can occasionally be found on other days also. You can similar artforms in other parts of the country which has a slightly different technique, style, and name.

The main unique feature of such designs is the fact that they are drawn by hand and are freehand drawing. When I was a kid u did try this during the Lakshmi pooja and really fell in love with it. Here in Lakshmi – Indian name logo I tried to keep that and went with hand lettering.

I created the initial drawing on the paper and then transferred to the computer and then again hand-drew the letters using the Wacom tablet.

I tried keeping the slight inaccuracies, shakes, and non-straight lines to give it a more hand-drawn look.

The initial sketch was to use both of the footprints in the design. However, I felt that the design was not looking good. It was a bit complicated and the version with a single footprint was looking better. Although I still am feeling a bit apprehensive about using a single footprint that too of the left foot. But still, this version looks better.

This logo is available for free for non-commercial use. You can use it any way you like. Although I would really appreciate a li k back or attribute, it is not al all mandatory. Just make sure that you don’t pass or sell this design as your own. That’s not good.

If you use this logo I would really love to see how you used it. Please comment below.<

Do feel free to edit the logo as you like.